This post goes from 1714 to 1782, when William’s last record appears. But he lived past that year, most likely.

William Clopton is a gateway ancestor. That is, he descends from royal lines several generations before him and then he moved to the American colonies. There were hundreds of these ancestors.

The William of this post is the son of Walter Clopton and Mary Jarratt. The Cassandra who married William Clopton is very probably the daughter of Richard and Frances Crump. Frances died April 26, 1720. We don’t know when Richard died.

Unfortunately, we don’t know much about William and Cassandra. It seems that they remained in New Kent County all their lives, and its records were destroyed by fire in 1787 and during the Civil War.

It’s not that simple, however. The name of the birth record was eaten away, so we’re not 100% sure this is William, though no researcher doubts it.

However, we finally have confirmation. In the Militia list (see below) the clerk recording the names of the troops in 1782 writes, as follows:

So we finally have legal proof that William is the son of Walter, without mice chewing away the record.

It’s very likely that the Cassandra who married William is a Crump. If so, here’s her record:

She was born shortly before her baptismal date—a week? A day? We don’t know.

Note that Frances Crump died April 26, 1720. Can there be any doubt that she died of complications from childbirth with Cassandra?

Here is the research of Lucy Lane Erwin, the dean of Clopton researchers. 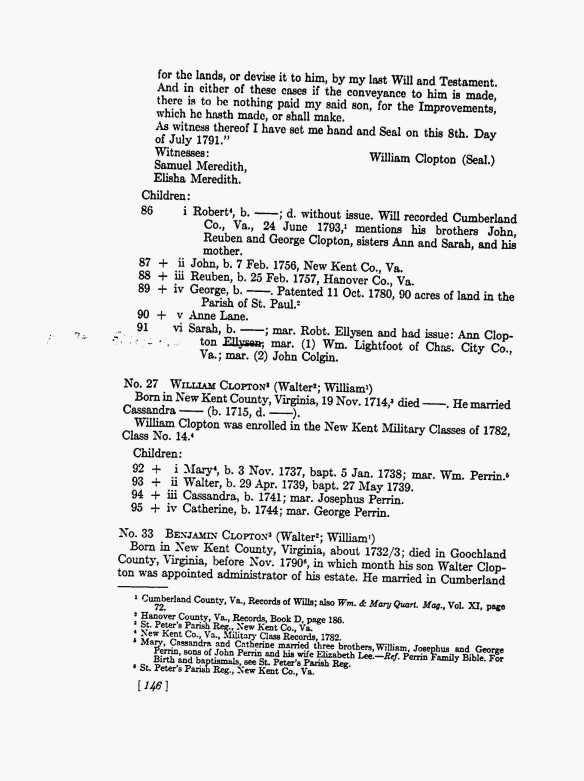 This is one of the few records that we’re confident belongs to our William (as opposed to the immigrant William Clopton’s son William, our William’s uncle).

“Ordered that all the lands in this parish be continued and divided into twenty precincts, the same that have been hitherto accustomed to be processioned and that the persons whose names are under specified in each precinct respectively, do processions the same and return to the vestry an account of the proceedings; that is to say in precinct”:

No. 1 John Roper and Henry Atkinson

No. 3 William Perkins and Jonathan Patteson

No. 4 Walter Clopton and Robert Jarratt

No. 5 Jesse Scott and George Waddill

No. 6 Anthony Cole and John Waddill

No. 7. William Macon and Martin Hewlet

No. 8 Richard Crump and William Clopton

No. 9 John Parke and Edward Bacon

No. 10 Charles Mannin and Joseph Ellison

No. 11 Thomas Martin and Devereux Clopton

This order is repeated 13 Sep 1755, though the precinct numbers have changed. The right Clopton names and their in-laws have not changed.

Therefore, it is highly probable that Cassandra is Richard Crump’s daughter and that William Clopton married her.

In fact, we can conclude that the case is proven.

In August 1782 William Clopton signed up to be one of the troops in New Kent County. It’s unknown whether he actually saw action. This is his record. 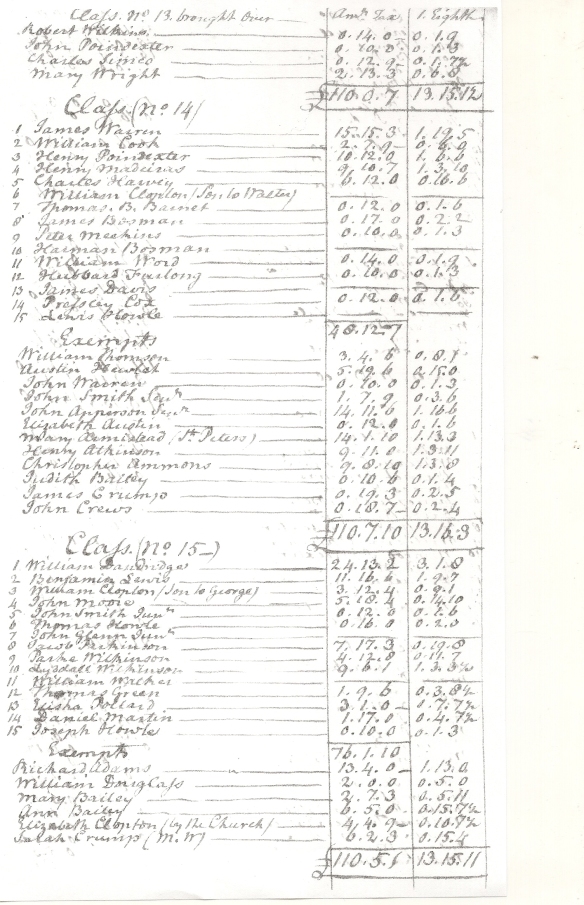 This proves that William was alive in that year, being 68 years old. It is amazing to think he signed up in a militia, to be one of the troops at that age. He was a super-patriot.

Here’s his record at DAR:

That DAR record means he also contributed supplies (in addition to signing up for the New Kent County militia).

Unfortunately, we don’t know much about his life from the records, since they were destroyed by fire. Pity.

We do know, however, that he was a super-patriot since he signed up for the militia in 1782 when he was 68 years old and also contributed supplies.