Philip, the seventh Capetian, born in 1165, reigned from 1179 to 1223 and was nicknamed Augustus (why?). On a personal note, he had a strange wedding ceremony with the young princess Ingeborg of Denmark (some say it was witchcraft). But politically, he expanded his royal domain to the detriment of the English Plantagenets.

Let’s begin with genealogical tables. This one comes from the encyclopedia Medieval France and gives an overview: 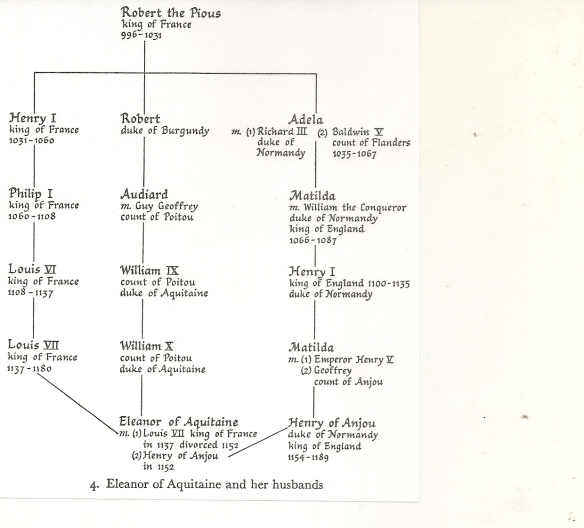 Robert the Pious is Robert II. It lays out the Capetians (left) and Normans (right), who transitioned to become the Angevin and then the Plantagenets.

This one is also from Warren’s biography:

The points are numbered for clarity and conciseness.

Quick word about France and Geography

It is important to realize that France as we know it today was not even close to being unified in the Medieval Age. It was broken up into a patchwork of duchies and counties, overseen by dukes and counts. They tirelessly competed with each other and the kings of “France.” The Capetians actually ruled over what is called Lesser France, the area around Paris and Orleans, including the Ile-de-France or Isle of France. The Ile or Isle of France was not a standard island as we think of it today, but a land area surrounding Paris. It was the base of the Capetians.

Plantagenets and Expanding His Royal Domain

Philip II Augustus was born near Paris on 21 Aug 1165, son and heir of Louis VII by his father’s third marriage to Adele (Adela).

Isabel died in childbirth at Paris 15 Mar 1190; her twin sons lived only a few hours. She was buried in the Cathedral of Notre Dame, Paris.

On 14 Aug 1193 he married (2) Ingeborg of Denmark, daughter of Waldemar I Knutsen, King of Denmark. They had no issue, and he repudiated the marriage 5 Nov 1193.

They had one son: Philip Hurepel, Count of Boulogne, Clermont, and Mammartin; and one daughter Marie, wife of Philip, Count of Namur; and then Henry I, Duke of Lorraine and Brabant. Louis repudiated this marriage, which the pope didn’t recognize on 7 Sep 1200. Agnes died in childbirth at Chateau Poissy 18 or 19 July 1201 and was buried in the Abbey church of Saint Corentine near Mantes.

By an unknown mistress he had one illegitimate son Pierre (Peter), nicknamed Carolus (Charlot), bishop and Count of Noyon.

Philip II died 14 July 1223 and was buried in the Abbey church of Saint Denis. He was 58 and reigned 43 years. He left £600,000 in his will, a greater income than any other previous Capetian king because Philip greatly expanded royal territory at the expense mainly of the Plantagenets.

Ingeborg died in the Priory of Saint Jean (or John) en l’Ile near Corbeil 29 July 1236 and was buried in the church of the priory.

Louis VIII was the son of Philip II Augustus. He was also the Count of Artois, duke of Normandy, Count of Anjou, Count of Auvergne, Count of Vermandois and Valois, Count of Alençon by his first wife Isabella, by law Countess of Artois, daughter of Baudouin (Baldwin) V, Count of Flanders and Hainault.

He married in the church of Port-Mort (Eure) in Normandy 23 May 1200 Blanche (or Blanca) of Castile, daughter of Alphonse (Alfonso), King of Castile, Toledo, and Extremadura, lord of Gascony, by Eleanor, daughter of Henry II, King of France. Blanche was born at Palencia in Castile before 4 Mar 1188.

He was anointed King of France with his wife at Reims 6 Aug 1223.

They had ten sons: Philip; Alphonse and Jean or John (twins with Alphonse), Louis (future king the Ninth and Saint), Robert, Count of Artois (he married Mahaut or Matilda of Brabant); Jean (John) Count of Anjou and Maine; Alphonse, Count of Poitiers and Toulouse, Marquis de Provence (he born 11 Nov 1220. He married on 13 Mar 1234 or 1241 by contract dated June 1229, papal dispensation dated 27 May 1236, since they by 3rd degreed Jeanne or Joan of Toulouse but they had no issue); Philip a.k.a. Dagobert; Etienne (Stephen); Charles, King of Sicily and Jerusalem and Count of Anjou (he married Beatrice of Provence); and two daughters: including Isabelle, nun and Abbess of Longchamp (she died 23 Feb 1269).